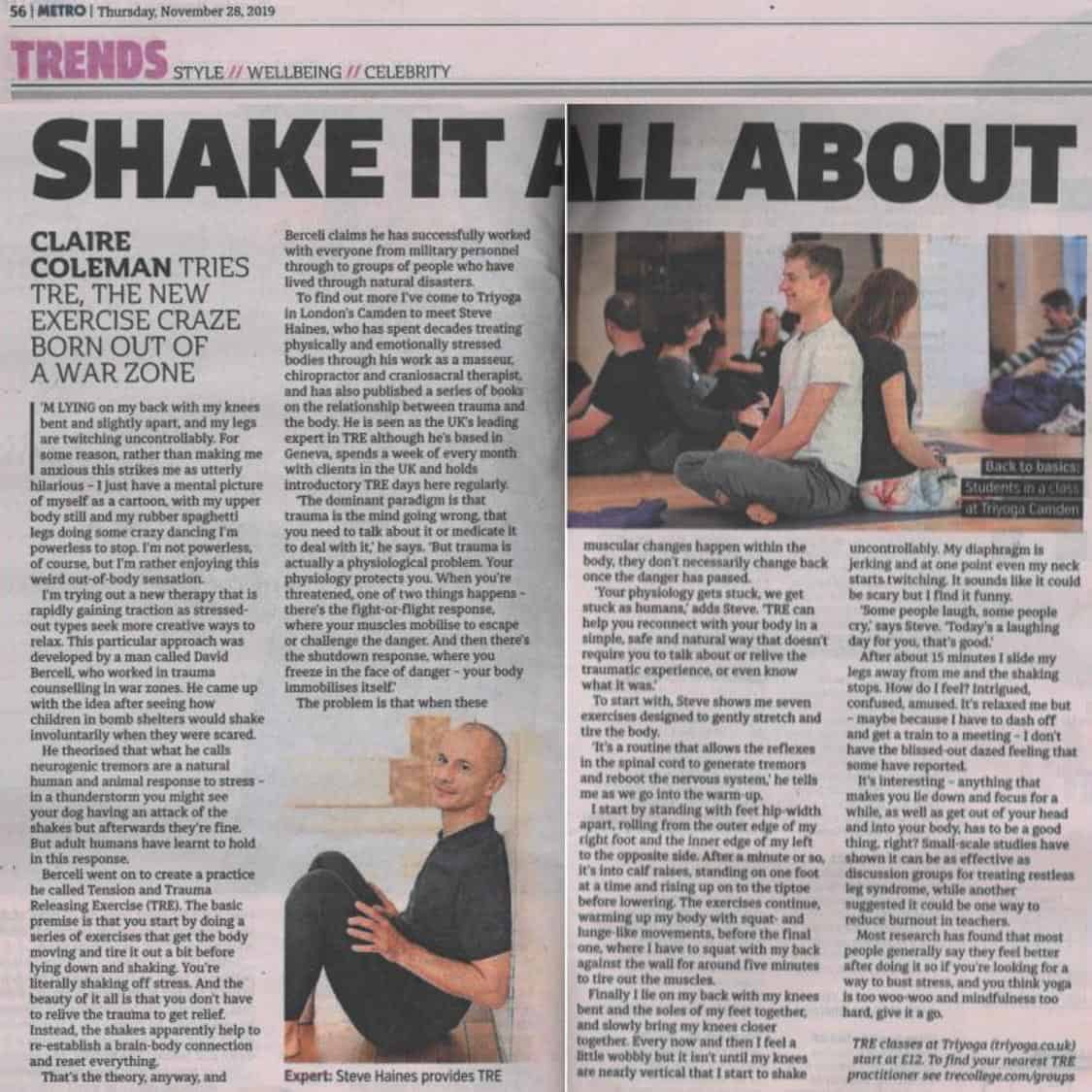 TRE, the new exercise craze born out of a war zone

I’m lying on my back with my knees bent and slightly apart, and my legs are twitching uncontrollably. For some reason, rather than making me anxious this strikes me as utterly hilarious — I just have a mental picture of myself as a cartoon, with my upper body still and my rubber spaghetti legs doing some crazy dancing I’m powerless to stop. I’m not powerless, of course, but I’m rather enjoying this weird out-of-body sensation.

I’m trying out a new therapy that is rapidly gaining traction as stressed-out types seek more creative ways to relax. This particular approach was developed by a man called David Berceli, who worked in trauma counselling in war zones. He came up with the idea after seeing how children in bomb shelters would shake involuntarily when they were scared.

He theorised that what he calls neurogenic tremors are a natural human and animal response to stress — in a thunderstorm you might see your dog having an attack of the shakes but afterwards they’re fine. But adult humans have learnt to hold in this response.

Berceli went on to create a practice he called Tension and Trauma Releasing Exercise (TRE). The basic premise is that you start by doing a series of exercises that get the body moving and tire it out a bit before lying down and shaking. You’re literally shaking off stress. And the beauty of it all is that you don’t have to relive the trauma to get relief. Instead, the shakes apparently help to re-establish a brain-body connection and reset everything.

You’re literally shaking off stress. And the beauty of it all is that you don’t have to relive the trauma to get relief.

That’s the theory, anyway, and Berceli claims he has successfully worked with everyone from military personnel through to groups of people who have lived through natural disasters.

To find out more I’ve come to Triyoga in London’s Camden to meet Steve Haines, who has spent decades treating physically and emotionally stressed bodies through his work as a masseur, chiropractor and craniosacral therapist, and has also published a series of books on the relationship between trauma and the body. He is seen as the UK’s leading expert in TRE although he’s based in Geneva, spends a week of every month with clients in the UK and holds introductory TRE days here regularly.

‘The dominant paradigm is that trauma is the mind going wrong, that you need to talk about it or medicate it to deal with it,’ he says. ‘But trauma is actually a physiological problem. Your physiology protects you. When you’re threatened, one of two things happens — there’s the fight-or-flight response, where your muscles mobilise to escape or challenge the danger. And then there’s the shutdown response, where you freeze in the face of danger — your body immobilises itself.’

‘The dominant paradigm is that trauma is the mind going wrong, that you need to talk about it or medicate it to deal with it,’ he says. ‘But trauma is actually a physiological problem. Your physiology protects you.

The problem is that when these muscular changes happen within the body, they don’t necessarily change back once the danger has passed.

‘Your physiology gets stuck, we get stuck as humans,’ adds Steve. ‘TRE can help you reconnect with your body in a simple, safe and natural way that doesn’t require you to talk about or relive the traumatic experience, or even know what it was.’

To start with, Steve shows me seven exercises designed to gently stretch and tire the body.

‘It’s a routine that allows the reflexes in the spinal cord to generate tremors and reboot the nervous system,’ he tells me as we go into the warm-up.

I start by standing with feet hip-width apart, rolling from the outer edge of my right foot and the inner edge of my left to the opposite side. After a minute or so, it’s into calf raises, standing on one foot at a time and rising up on to the tiptoe before lowering. The exercises continue, warming up my body with squat- and lunge-like movements, before the final one, where I have to squat with my back against the wall for around five minutes to tire out the muscles.

Finally I lie on my back with my knees bent and the soles of my feet together, and slowly bring my knees closer together. Every now and then I feel a little wobbly but it isn’t until my knees are nearly vertical that I start to shake uncontrollably. My diaphragm is jerking and at one point even my neck starts twitching. It sounds like it could be scary but I find it funny.

‘Some people laugh, some people cry,’ says Steve. ‘Today’s a laughing day for you, that’s good.’

If you’re looking for a way to bust stress, and you think yoga is too woo-woo and mindfulness too hard, give it a go.

After about 15 minutes I slide my legs away from me and the shaking stops. How do I feel? Intrigued, confused, amused. It’s relaxed me but — maybe because I have to dash off and get a train to a meeting — I don’t have the blissed-out dazed feeling that some have reported.

It’s interesting — anything that makes you lie down and focus for a while, as well as get out of your head and into your body, has to be a good thing, right? Small-scale studies have shown it can be as effective as discussion groups for treating restless leg syndrome, while another suggested it could be one way to reduce burnout in teachers.

Most research has found that most people generally say they feel better after doing it so if you’re looking for a way to bust stress, and you think yoga is too woo-woo and mindfulness too hard, give it a go.